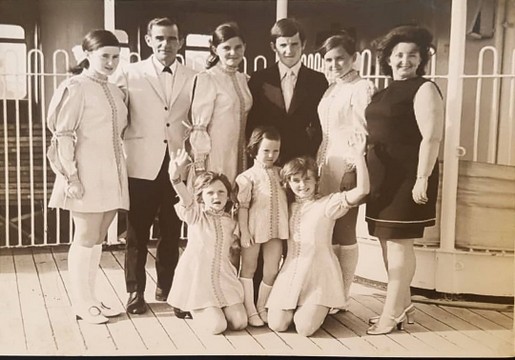 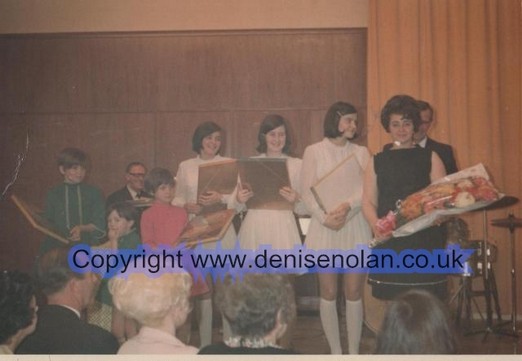 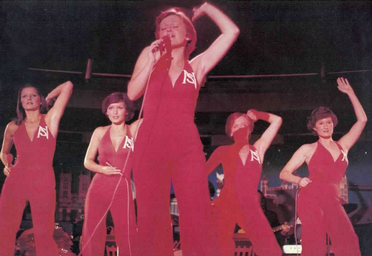 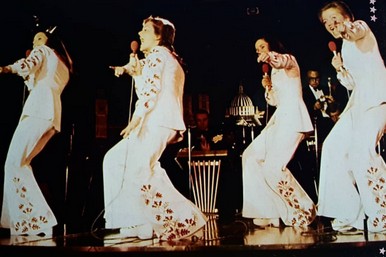 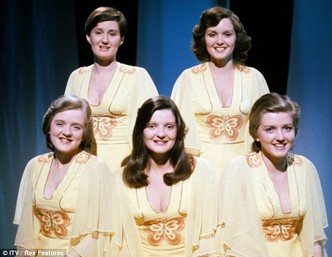 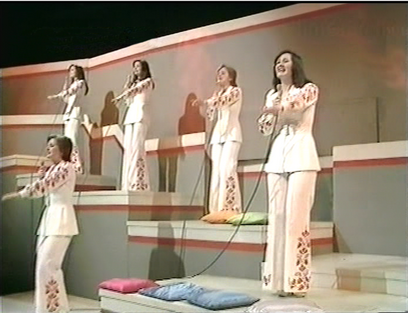 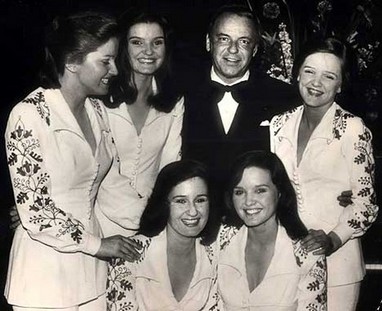 Above: On the Roy Castle Show & With Frank sinatra
1975 also saw us appear, amongst others on Roy Castle's Record Breakers where we sang a Eurovision medley from our live show.  We had already released the single 'But I Do' on the EMI label and it was followed up with a song composed by Cook and Greenway called '(Won't You) Make A Little Sunshine Shine' which we sang on The Basil Brush Show and sadly those two singles never made it into the top 40. To be considered for Top Of The Pops your song had to make it to the top 40. Our first two singles only made it into the lower 60s despite us singing them on TV. Or maybe because we sand them on TV!!
From 1976 onwards I worked non stop with my Sisters and more TV work followed. Highlights for me included a Christmas special with Morecambe and Wise, a South African tour with Rolf Harris and a tour of America with Englebert Humperdink. The tour of South Africa took us away from home for six weeks. Once again we stayed in magnificent accomodation. Our hotel, the President, was very plush  One day when we decided to take a sauna. We entered the sauna and through the steam mist we could make out a handsome man. The man turned out to be Tom Jones wearing nothing more than a small towel. That was the only steam in there that day! He was also appearing at the 3 Point Theatre and he went on to comment that he thought we were great singers and that our harmonies were fabulous. Stu Francis was also on that tour. He was lovely to work with. We were only young and we didn't really know what Apartheid was all about. I think if I was offered the tour now I would say no. Apartheid was a terrible thing, but to us South Africa was nothing more than a beautiful country and the tour seemed like a marvellous opportunity. 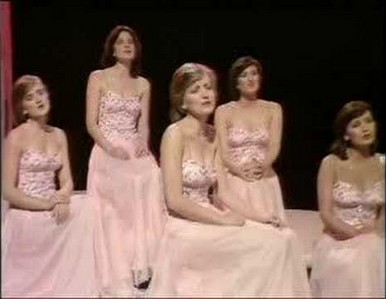 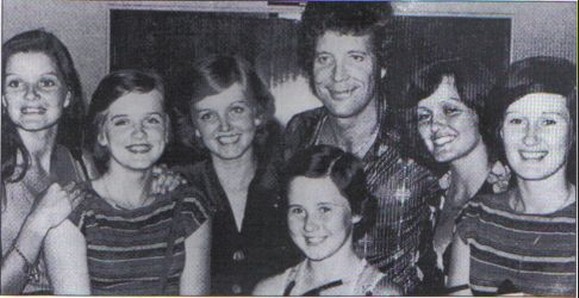 Above: Morecambe & Wise Show and with Tom Jones.
1976 saw the release of more singles that also didn't do particularly well. 'Rain', 'Thanks For Calling' and 'When You Are A King'  were all shown on TV with the latter even featuring on both 'The Two Ronnies' and on 'Morecambe & Wise' over the Christmas Period with an audience of 20 million each. Altogether nine singles were released while I was with the group. Robert Earl had sent A&R people from record companies to see us and we were signed to the EMI subsidiary,Target Records. The promotion of each song was not very good and although some of the records were good they all sank with hardly a trace. We even had talented writers such as Roger Cook and Roger Greenaway who had scored masses of hits, and Bruce Welsh producing them. Two singles stand out for me. Firstly 'Love Transformation' which was recorded, firstly, as an anonymous soundtrack for a TV commercial. The product being Dulux paint. While we recorded it the producers wanted me to sing the soprano notes. Each time we rehearsed the song he kept asking if I could sing a bit higher. It was an almost impossible feat. Eventually, needless to say, both he and I were happy with the result. The advert was on TV all the time and people began asking writing in to ask who had recorded it. It was given a poster campaign, but there was no promotional video and no TV appearances to support it. The other single I note was 'Love Bandit'  I was to be the lead singer on this 1977 single. The song was actually quite contemporary and we were mildly confident of a hit. The single almost entered the charts and managed to sell just  short of 60,000 copies which would put the song at number one for six months in today's market. It had entered the charts at number 54 and rose to 50 in the mid week chart. But at the time only the top 40 was published to the public.  We we able to sing 'Love Bandit' on an episode of the Two Ronnies - several months after the release!!  It was a great song. The choreography was good and it had a modern feel to it. On the live version on the Two Ronnies it was sung to an orchestra so it didn't quite have the same funky sound. Perhaps that hampered it. That and Radio 1...the one radio station that mattered most of all, refused to play it. If Radio One didn't have you on at least their B list then your song didn't stand a chance. Millions of people listened to Radio One at that time. They always wanted to chat with us about our career, but never promoted us.. Songs on their A list were sometimes played on the hour. A team of about six people chose what the country listened to. Even when the act did make the charts a few years ater, Radio One only played our singles  once a week - On the chart show! Nowadays Radio Two has broadened its appeal and local radio is playing a bigger part in what people listen to - In the mid 1970s the only local stations were BBC ones - there was not a single independent station! So we were really up against it. Most TV shows were recorded weeks in advance, so by the time it was aired the record had long been distributed; and unsold copies were returned to the record company. It was depressing that an act that was a household name couldn't get a hit. Naturally we were devastated that it didn't have the impact we had hoped for. Most of the singles made it somewhere into the top 100 chart. Sadly, not once were we were not allowed to appear on Top Of The Pops to promote them, as only records that were actually in the top 40 could appear, which was another hindrance. 'Top Of The Pops' would have been incredible promotion, and I am sure it would have helped 'Love Bandit' if not some of the other singles.  In today's chart the top 200 singles are visible to the public. With Youtube, spotify  and suchlike a record can be promoted Worldwide without the backing of any radio stations. Back then we had very little. 'Love Bandit' didn't even have a picture cover! When I look back  and watch the 'Top Of the Pops' Re runs I am often shocked at what rubbish did actually make it into the charts. Sometimes songs that were barely even songs had praise heaped on them by DJs, mainly I think, because of who they were, not what they sang. It also seemed that being able to sing was not that important to them either.
In 1977 we were invited to appear in Summer Season at Eastbourne with Ronnie Corbett and Janet Brown. It was a fairly short, eight week season, but we enjoyed it enormously. Ronnie was a lovely man, but very quiet and he tended to keep himself to himself. Janet was also really sweet with us. The Tiller Girls provided the dancing. We had a great time living in rented digs. Our parents had stayed at home, so it was good fun to be left to our own devices. Eastbourne wasn't the nightclub capital of the World, but we still had a ball. 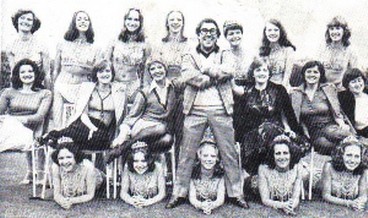 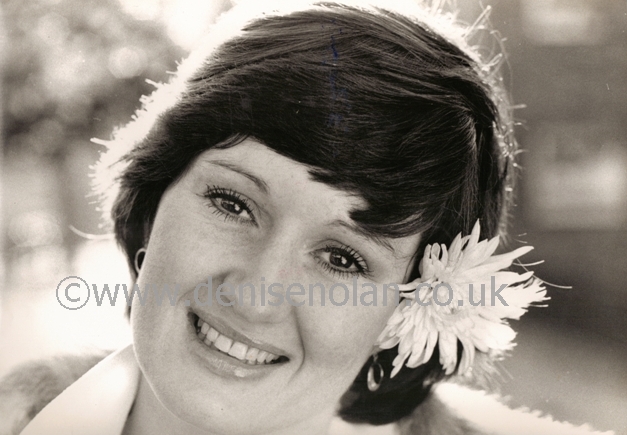 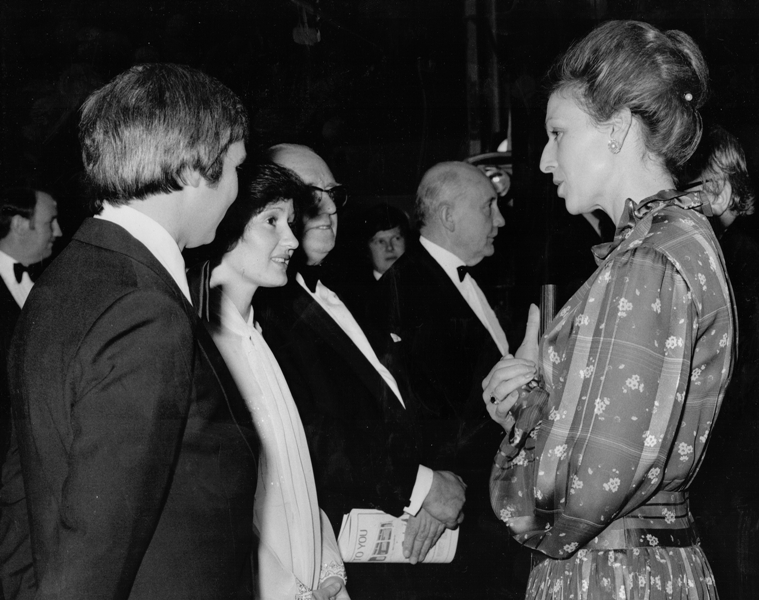